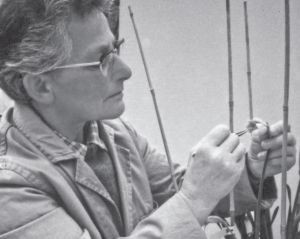 A DVD of educational, reference, and historical significance.

George Lee was president of The American Daffodil Society from 1957 to 1960 and was the recipient of its Silver Medal in 1964. He served as the first Executive Director of the Society from 1967 to 1977. The first of his eight notebooks covers general information about daffodils. The remaining seven contain comments on approximately 1300 cultivars in alphabetical order (except part of section M is lost) collected from catalogs of the late 1930s. The classifications used in Mr. Lee's notebooks are the ones prior to the Throckmorton classification system.

Barbara Fry 1922-1997 joined the Rosewarne Experimental Horticultural Station in the 1950s as a Field Assistant, later becoming an Assistant Scientific Recorder and finally, a Scientific Officer. She was involved with breeding daffodils suitable for the commercial bulb industry and received the American Daffodil Society Gold Medal in 1981. Her notes on tazettas cover 38 cultivars, one per page. Andrew Tompsett assisted in interpreting her handwriting so that we provide a retyped version of her text in addition to the scan.

These publications are also available as a free download at the American Daffodil Society's website: dafflibrary.org.  Please consider your Internet connection speed, and other variables, if you wish to avail yourself of the free download opportunity.

This product hasn't received any reviews yet. Be the first to review this product!